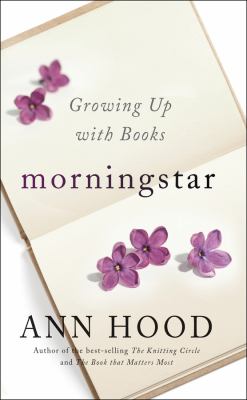 In her admired works of fiction, including the recent The Book That Matters Most, Ann Hood explores the transformative power of literature. Now, with warmth and honesty, Hood reveals the personal story behind these beloved novels.Growing up in a mill town in Rhode Island, in a household that didn't foster a love of literature, Hood discovered nonetheless the transformative power of books. She learned to channel her imagination, ambitions, and curiosity by devouring ever-growing stacks. In Morningstar, Hood recollects how The Bell Jar, Marjorie Morningstar, The Harrad Experiment, and The Outsiders influenced her teen psyche and introduced her to topics that could not be discussed at home: desire, fear, sexuality, and madness. Later, Johnny Got His Gun and The Grapes of Wrath dramatically influenced her political thinking, while the Vietnam War and the Kent State shootings became headline news and classics such as Dr. Zhivago and Les Mis#65533;rables stoked her ambitions to travel the world. With characteristic insight and charm, Hood showcases the ways in which books gave her life and can transform--even save--our own lives.