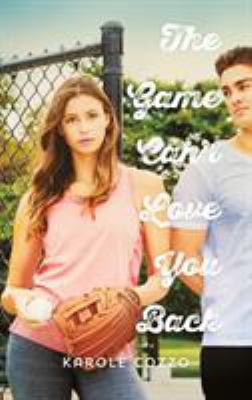 Eve is used to being the odd woman out. As the only girl on her school's baseball team, she knows exactly how to put sweaty, macho baseball players in their place, and she's learned to focus on one thing and one thing only--being the best pitcher she can be.

But when a freak accident forces her school to be absorbed by the neighboring town, Eve has to contend with a new group of guys who aren't used to having a woman on their team. And the new team's star pitcher, Jamie, has no interest in being ousted from his throne. He can't afford to give up his starting slot to a new pitcher--especially to a girl.

As the competition between Jamie and Eve starts to heat up, so does their attraction to each other. Can they keep their heads in the game, or will they end up getting played?

Chosen by readers like you for Macmillan's young adult imprint Swoon Reads, The Game Can't Love You Back follows Eve as she is forced to join a new baseball team and contend with the insufferable (and cute) rival pitcher.

How to Keep Rolling After a Fall :

" This is how a Young Adult novel is done . " --Teamskelley, Goodreads Reviewer

How to Say I Love You Out Loud :

"A budding romance with family drama and a feel-good ending." -- School Library Journal

The Truth About Happily Ever After :