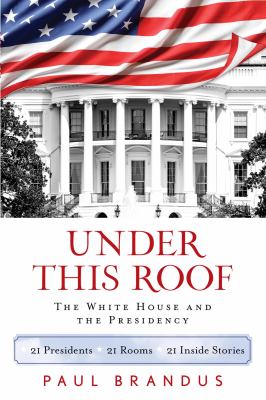 “Like taking a tour of the White House with a gifted storyteller at your side!” Why, in the minutes before John F. Kennedy was murdered, was a blood-red carpet installed in the Oval Office? If Abraham Lincoln never slept in the Lincoln Bedroom, where did he sleep? Why was one president nearly killed in the White House on inauguration day—and another secretly sworn in? What really happened in the Situation Room on September 11, 2001? History leaps off the page in this “riveting,” “fast-moving” and “highly entertaining” book on the presidency and White House in Under This Roof, from award-winning White House-based journalist Paul Brandus. Reporting from the West Wing briefing room since 2008, Brandus—the most followed White House journalist on Twitter (@WestWingReport)—weaves together stories of the presidents, their families, the events of their time—and an oft-ignored major character, the White House itself. Walk with John Adams through the still-unfinished mansion, and watch Thomas Jefferson plot to buy the Louisiana Territory Feel the fear and panic as British invaders approach the mansion in 1814—and Dolley Madison frantically saves a painting of Washington Gaze out the window with Abraham Lincoln as Confederate flags flutter in the breeze on the other side of the Potomac Be in the room as one president is secretly sworn in, and another gambles away the White House china in a card game Stand by the presidential bed as one First Lady—covering up her husband’s illness from the nation—secretly makes decisions on his behalf Learn how telephones, movies, radio, TV changed the presidency—and the nation itself Through triumph and tragedy, boom and bust, secrets and scandals, Brandus takes you to the presidential bedroom, movie theater, Situation Room, Oval Office and more. Under This Roof is a “sensuous account of the history of both the home of the President, and the men and women who designed, inhabited, and decorated it. Paul Brandus captivates with surprising, gloriously raw observations.”