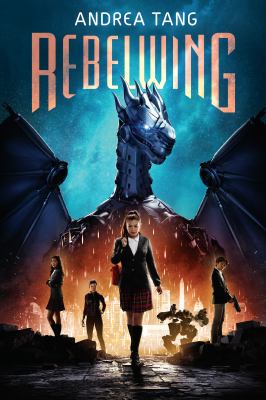 "Mixing everything that's best about dragons, dystopia, and generational conflict, Tang delivers a high flying debut that pulls no punches." --E.K. Johnston, #1 New York Times Bestselling Author Things just got weird for Prudence Wu. One minute, she's cashing in on a routine smuggling deal. The next, she's escaping enforcers on the wings of what very much appears to be a sentient cybernetic dragon. Pru is used to life throwing her some unpleasant surprises--she goes to prep school, after all, and selling banned media across the border in a country with a ruthless corporate government obviously has its risks. But a cybernetic dragon? That's new. She tries to forget about the fact that the only reason she's not in jail is because some sort of robot saved her, and that she's going to have to get a new side job now that enforcers are on to her. So she's not exactly thrilled when Rebelwing shows up again. Even worse, it's become increasingly clear that the rogue machine has imprinted on her permanently, which means she'd better figure out this whole piloting-a-dragon thing--fast. Because Rebelwing just happens to be the ridiculously expensive weapon her government needs in a brewing war with its neighbor, and Pru's the only one who can fly it. Set in a wonderfully inventive near-future Washington, D.C., this hilarious, defiant debut sparkles with wit and wisdom, deftly exploring media consumption, personal freedoms, and the weight of one life as Pru, rather reluctantly, takes to the skies.