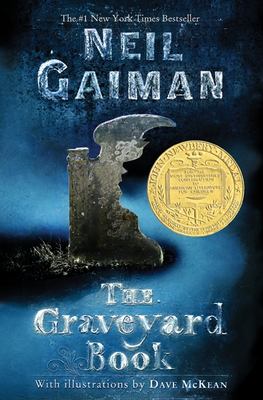 Bod is an unusual boy who inhabits an unusual place-he's the only living resident of a graveyard. Raised from infancy by the ghosts, werewolves, and other cemetery denizens, Bod has learned the antiquated customs of his guardians' time as well as their timely ghostly teachings-like the ability to Fade. Can a boy raised by ghosts face the wonders and terrors of the worlds of both the living and the dead? And then there are things like ghouls that aren't really one thing or the other. This chilling tale is Neil Gaiman's first full-length novel for middle-grade readers since the internationally bestselling and universally acclaimed "Coraline," Like "Coraline," this book is sure to enchant and surprise young readers as well as Neil Gaiman's legion of adult fans.

I can't say enough about Neil Gaiman's latest title The Graveyard Book. On the night of his parent's brutal murder, a toddler wonders off and finds himself in a graveyard. The ghosts there take him in and vow to raise him as their own. He has other g…

As a young child, Nobody (Bod) Owens escapes the evil and mysterious Jack who is responsible for the deaths of his entire family.  Living at the graveyard is an interesting way to grow up and Bod becomes friendly with ghosts from all eras. …