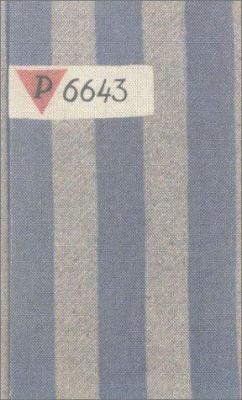 Written in 1945 by three young Polish former inmates of Auschwitz -- Janisz Nel Siedlecki, Krystyn Olszewski, and Tadeusz Borowski, author of This Way for the Gas, Ladies and Gentlemen -- and published in the spring of 1946 by a fourth, Anatol Girs, a graphic artist and publisher whose publishing company in Warsaw had been bombed during the Uprising, We Were in Auschwitz is, if not the first, then one of the very first books ever written about the horrors of the Nazi concentration camp. Dedicated to the American Seventh Army, this work originally appeared in Polish in an edition of 10,000 numbered copies, unspecified numbers of which were bound in material cut from concentration camp stripes and from SS uniforms.

The inspiration for writing a book which could tell the truth about Auschwitz came from the conditions in immediately-post-war Munich in which the authors found themselves, and was articulated by Janusz Nel Siedlecki in his 1994 memoir, Beyond Lost Dreams: "As the one common enemy disappeared, so vanished all moral rules and restraints. Individuals, as well as large groups, competed for food, recognition, and a better life. The polish people were divided into innumberable factions .... The survivors carried forth their banners of "martyrdom" and sowed the seeds of future legends. They wanted glory -- I wanted to bear witness for the tortured, gassed, burnt; for all the unknown, unnamed, already forgotten dead."

The publication history of We Were in Auschwitz reflects both the physical chaos that followed the end of the war in Europe and the political situation in Poland and in the U.S. Having written the book in their requisitioned apartment in Munich, the authors neededAmerican permission to publish it. "There was no printing without an official permit, and