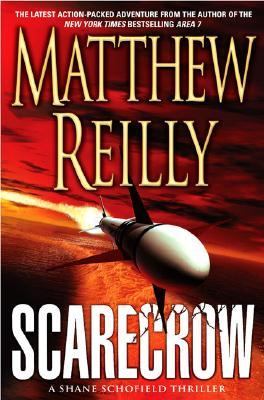 IT IS THE GREATEST BOUNTY HUNT IN HISTORY FIFTEEN NAMES There are 15 targets, the finest warriors in the world-commandos, spies, terrorists. And they must all be dead by 12 noon, today. The price on their heads: almost $20 million each. ONE HERO Among the names on the target list, one stands out. An enigmatic Marine named Shane Schofield, call-sign: SCARECROW. NO LIMITS And so Schofield is plunged into a headlong race around the world, pursued by a fearsome collection of international bounty hunters-including the 'Black Knight', a notoriously ruthless hunter who seems intent on eliminating only Schofield. The race is on and the pace is frantic as Schofield fights for survival, in the process unveiling a vast international conspiracy and the terrible reason why he cannot, under any circumstances, be allowed to live! He led his men into hell in Ice Station . He protected the President against all odds in Area 7 . This time it's different. Because this time Scarecrow is the target. Scarecrow is the third book in the Shane Schofield series. With new exotic locations and weaponry, plus a returning cast of old friends from the battlefield, Scarecrow is set to take the action/adventure world by storm, and leave readers gasping for air. With his trademark style, Matthew Reilly continues to establish himself as one of today's top thriller writers.