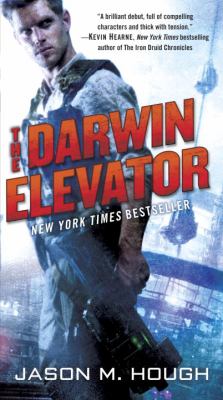 Jason M. Hough's pulse-pounding debut combines the drama, swagger, and vivid characters of Joss Whedon's Firefly with the talent of sci-fi author John Scalzi. In the mid-23rd century, Darwin, Australia, stands as the last human city on Earth. The world has succumbed to an alien plague, with most of the population transformed into mindless, savage creatures. The planet's refugees flock to Darwin, where a space elevator--created by the architects of this apocalypse, the Builders--emits a plague-suppressing aura. Skyler Luiken has a rare immunity to the plague. Backed by an international crew of fellow "immunes," he leads missions into the dangerous wasteland beyond the aura's edge to find the resources Darwin needs to stave off collapse. But when the Elevator starts to malfunction, Skyler is tapped--along with the brilliant scientist, Dr. Tania Sharma--to solve the mystery of the failing alien technology and save the ragged remnants of humanity. Advance praise for The Darwin Elevator "A brilliant debut, full of compelling characters and thick with tension."--Kevin Hearne, New York Times bestselling author of The Iron Druid Chronicles "Claustrophobic, intense, and satisfying . . . I couldn't put this book down."--Hugh Howey, New York Times bestselling author of Wool "This book plugs straight into the fight-or-flight part of your brain."--Ted Kosmatka, author of The Games