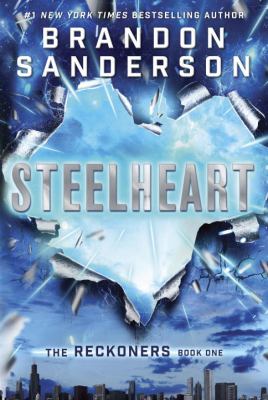 nbsp;nbsp; From the #1 New York Times bestselling author of Words of Radiance , coauthor of Robert Jordan's Wheel of Time series, and creator of the internationally bestselling Mistborn Trilogy, Brandon Sanderson presents Steelheart, the first book in the Reckoners series, an action-packed thrill ride that will leave readers breathless. nbsp;nbsp; How far would you go for revenge if someone killed your father? nbsp;nbsp; If someone destroyed your city? nbsp;nbsp; If everything you ever loved was taken from you? nbsp;nbsp; David Charleston will go to any lengths to stop Steelheart. But to exact revenge in Steelheart's world, David will need the Reckoners--a shadowy group of rebels bent on maintaining justice. nbsp;nbsp; And it turns out that the Reckoners might just need David too. [ STAR ] "Snappy dialogue, bizarre plot twists, high intensity action, and a touch of mystery and romance; it's a formula that sucks readers into the prologue, slings them through one tension-filled encounter after the other, and then...leaves them panting for the sequel."-- Booklist , Starred nbsp; "The near-constant action, Sanderson's whiz-bang imaginings, and a fully realized sense of danger... make this an absolute page-turner."-- Publisher's Weekly nbsp; "Perfect for genre fans who love exciting adventure stories with surprising plot twists."-- School Library Journal nbsp; "A straight-up Marvel Comics-style action drama featuring a small band of human assassins taking on costumed, superpowered supervillains with melodramatic monikers."-- Kirkus Reviews nbsp; "Fantastic! The suspense is relentless and the climax explosive, with a resolution that I'll be thinking about for a long time." --James Dashner, New York Times bestselling author of the Maze Runner series and The Eye of Minds nbsp; "Unfortunately for my ego, Steelheart is another win for Sanderson, proving that he's not a brilliant writer of epic fantasy, he's simply a brilliant writer. Period." --Patrick Rothfuss, author of the New York Times and USA Today bestseller The Name of the Wind