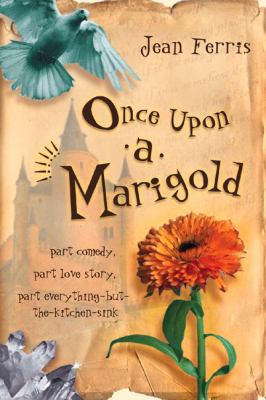 Every once in a while, we are lucky enough to stumble upon a book that is so surprisingly good you can hardly put it down. “Once Upon a Marigold,” by Jean Ferris fits this description perfectly. Set in a fairy tale world complete with trolls, kingdoms, loveable dogs and mischief, this comedic story begins with six-year-old Christian befriending a troll named Edric. Christian has run away from home and Edric cannot convince him to return. The two live in harmony with Edric morphing into a father-figure while Christian matures into a young man. With this comes a stronger interest in the world around him. The inventive Christian has been watching the goings-on of King Swithbert’s castle across the river, and begins communicating with Princess Marigold via carrier pigeon (a.k.a. “p-mail). The two form an immediate bond complete with a blossoming romance, despite the curse that keeps everyone but King Swithbert distant from Marigold. Curiosity leads Christian to become employed as a servant in the castle just to be closer to Marigold. Luckily for Marigold and her father, his timing was impeccable.
Queen Olympia has successfully married off her beautiful triplet daughters, and is desperately trying to arrange a marriage for Marigold to get her out of the way, too. Christian overhears the evil queen’s plan to take over the kingdom and knows he must take swift action to save Marigold and her father. By twist of fate, Christian is not only reunited with Edric, but also with his long, lost brothers. It takes a team effort to reach the end of this tale, and it is certainly worth the read.

Reminiscent of the 1987 classic “The Princess Bride” in wit and humor, this story is a must-read for tweens and adults who enjoy a humorous fantasy with a touch of romance. Although the story does make references to wine drinking and smoking, the tone is whimsical and humorous. It is loaded with positive messages about manners, family and self-discovery. There is no inappropriate language and just a touch of benign romantic content. “Once Upon a Marigold” is the opening book to a three-part series.