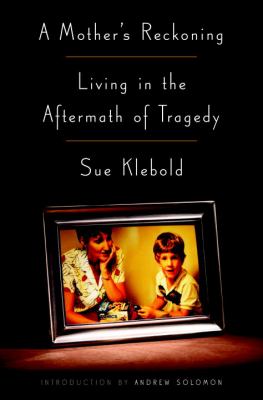 A Mother's Reckoning wasn't always an easy read memoir to read. And, considering its author, I imagine it was an even harder book to write. Sue Klebold is the mother of a school shooter. On April 20, 1999 her seventeen-year-old son Dylan, along with his friend Eric Harris, opened fire at their Colorado high school and engaged in one of the most famous school shootings to date. With the perpetrators of this heinous crime among the deceased, the blame automatically shifted to their parents. How could they not know? people wondered (and still do). What signs did they miss or refuse to see? What could've they done to prevent this?

What I appreciated most about Klebold's book is that she offers no easy answers to these questions.  She does not blame the usual suspects (guns, bullies, video games, trench coats, heavy metal music).  She seeks forgiveness but does not expect it. She loves and grieves for Dylan yet is repulsed by the cold-blooded killer he became. She rarely makes excuses but instead looks through the glass clearly at her son's actions and the role she played.

One of the most frightening aspects of this book is, that after reading it, I realized: Sue Klebold was not a bad mother. Not really. She was a downright good one: loving, empathetic, hard-working, educated, involved. She made the same mistakes millions of other parents have made and raised her son the same way millions of others have raised their children. And yet...

And yet, Columbine still happened. And for middle-and-high school children like myself in the late 1990s, Columbine became a watershed event that defined our school experience. It is not an understatement to day: it changed everything. Not only did Columbine shape the landscape of future mass shootings and changed the way law enforcement responds to them, it also cemented the idea that schools could be dangerous, that no place is safe.

A Mother's Reckoning is a searing, sometimes shattering, but all together compelling and unforgettable book. An additional companion book is Columbine by Dave Cullen, a journalist who spent ten years researching, writing about, and dispelling the myths surrounding this tragedy.