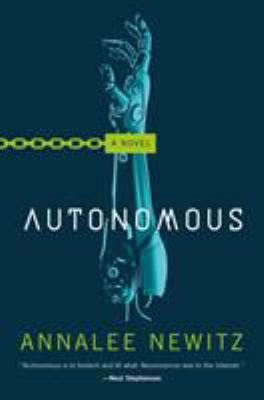 In a future that will happen sooner rather than later, a pharmaceutical pirate named “Jack“ (notorious for her anti-patent stance on science) successfully reverse-engineers the best drug on the market to give employees a focus boost. Jack has essentially stolen the formula for this designer drug owned by a corporate world which values people solely on the economic value they put into society. (Distant future, right?) Well, this intellectual property infringement is really frowned upon. They are coming after Jack. Especially since she made a version of the performance drug that is far superior. Now, a human agent and an Artificial Intelligence are out to kill her. Jack may be able to protect herself if she can prove that the original corporate drug was secretly designed to be highly addictive and make people desire work above all else for corporate gain.

The author, Annalee Newitz, is the founder of the popular nerd site iO9.com and is a biotechnology journalist. She skillfully proved her storytelling mettle which will surely appeal to young science fiction lovers and readers who stand contrary to the establishment.