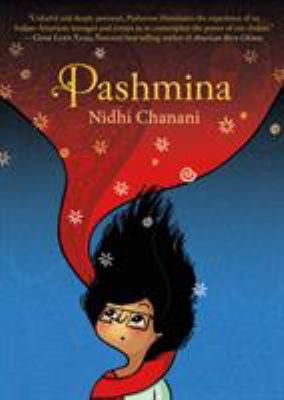 Pashmina is a beautifully illustrated graphic novel about a second generation Indian- American teen named Priyanka. Priyanka is dealing with the typical struggles of being a teenager, butting heads with her mom, learning to drive, and bullies making fun of her at school. Priyanka’s mom also refuses to reveal why they moved to the U.S. and left her family and her father behind.  Priyanka’s does all she can to make sure she blends into the background at school. She begs her classmates and family to refer to her as Pri, and she refuses to sign up for a graphic novel contest even though her teacher insists that she should.

However, Pri’s life is shaken up when she finds a beautiful pashmina hidden away in a suitcase and finds that it has magical properties and can transport her to India when she wears it. Pri later visits family in real-world India and discovers that the colorful and beautiful India of her dreams may be partially fabricated. Join Pri on her journey to discover the secrets behind her mother’s decision to leave India and Pri’s father behind and as she discovers places in the real world aren’t always as they are depicted in travel books and films.