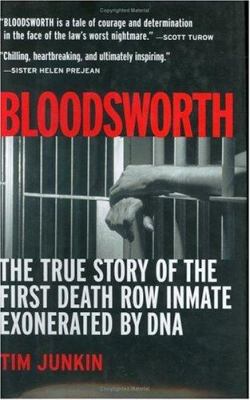 What if everyone in the state of Maryland read the same book? That’s the idea behind One Maryland, One Book, an initiative started by Maryland Humanities. This year’s book is “Bloodsworth: The True Story of the First Death Row Inmate Exonerated by DNA Evidence” by Tim Junkin. Set in Maryland, it is a true crime exploration of an issue that affects many individuals and families in the United States.

After the horrible 1984 death of young Dawn Hamilton in Baltimore County, law enforcement was pressed to find the killer. But the process was rushed, and flawed, and Kirk Bloodsworth was unfairly charged with murder, and given the death sentence.

Bloodsworth insisted upon his innocence and studied as much as about criminal justice as his prison library could offer. It was there he learned about the new science of DNA testing. His lawyer petitioned for its use, and Bloodsworth was proved innocent. His exoneration was the first of its kind. Since then, DNA evidence has set many more wrongfully imprisoned inmates free.

If you’re a true crime fan, and love podcasts or television series such as “Serial” or “Making a Murderer,” or you’re interested in regional history, you may be interested in “Bloodsworth.”