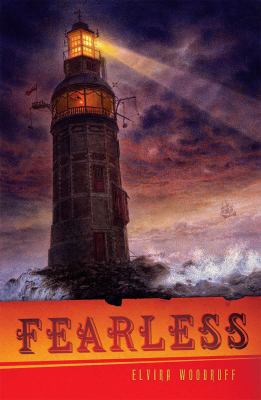 Imagine living within sight and sound of the sea in a fishing village on the English coast but being terrified of the ocean. That's exactly the situation for 11-year-old Digory Beale, the hero of "Fearless." Worse yet, when his aunt can no longer feed the many children under her roof, Digory is forced to make his own way in the world. The year is 1703 and Digory's prospects -- even though he is a talented young artist -- are about as bright as those of a worm on a fishhook. Hungry thieves, even boys, are often hanged for stealing so much as a loaf of bread, and the highways are full of brigands and bullies. Just when Digory's fortunes have reached low tide, his luck changes during a chance encounter with Henry Winstanley, a wealthy inventor. Mr. Winstanley takes Digory under his wing and things are going well for him until the "Storm of the Century" threatens the coast. He must help the famous inventor shore up the Eddystone lighthouse. Digory's fear of the sea is put to the test in this historical adventure story by Elvira Woodruff. Better yet, Winstanley was a real person who built one of England's most famous early lighthouses. A great read for ages tweens, especially boys.