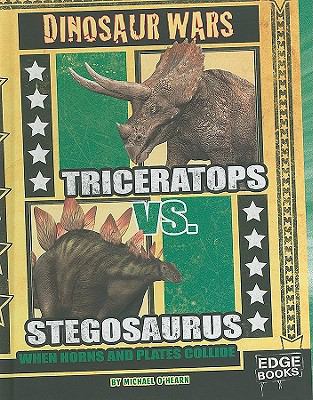 LET'S GET READY TO RUMBLE!   Have you ever wondered if a Stegosaurus could beat up a Triceratops?  In this series, the Dinosaur Wars, you will learn about each dinosaur's unique defenses, weapons, size, speed, agility and attack style.  The last part of this book illustrates the battle when horns and plates collide.  You are invited to the battle of the century, see who will win!  Will it be the horns of the Triceratops that defeat the fierce Stegosaurus?  Or will the spikes of the Stegosaurus' tail bash the mighty Triceratops?  The Dinosaur Wars series include such match ups such as a T-Rex and a Velociraptor and an Allosaurus and a Brachiosaurus.   Each book is packed with tons of action, facts and vivid pictures which make it a great educational read.