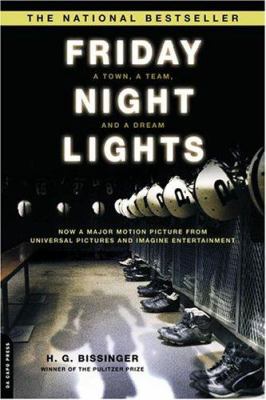 In the small town of Odessa, nestled in the heart of West Texas, high school football is a way of life. Every Friday night people from far and wide descend upon the stadium of their national pastime. The story of Friday Night Lights is not just a story of athletic prowess or football glory, and although those themes are present, the heart of the narrative is about the town Odessa itself and its relationship with life, race, and of course football in the late 1980's. The hopes and dreams of a community rest on the adolescent shoulders of its star football players. Some players live for the second they can put on the Panthers uniform and run out on the field, while others struggle with the high-pressure environment in such a little town. Odessa is a small town with its spirit crushed by the downturn of the oil industry and a feeling of general disparity hovers over its residents. But on Friday nights, whether they be rich or poor, black, white, or Hispanic, they are bound together under the lights of Ratliff Stadium where the Permian Panthers not only play for football glory, but for the hopes, dreams and aspirations of an entire community.

The original movie was one of the best football movies I have ever seen and the TV Series followed in it's footsteps perfectly. However, there is no substitute for reading the book! This is the perfect time of year to engross yourself in this story. If you play football, you can ride the wave of dreams realized and dashed. If you're a football fan, the trip is just as wild!

Yeah, I haven't read the book, but the show is completely engrossing.

I am so addicted to the show that was inspired by this book - thanks for the recommendation. Can't wait to pick this one up!