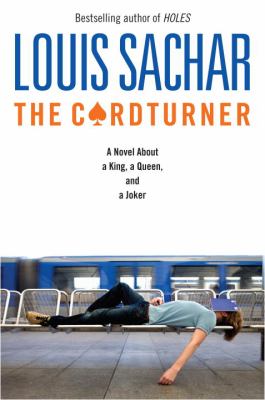 When I was a kid, my grandmother played card games with us on rainy days at the beach. She dealt a mean game of Old Maid and Crazy Eights, but Bridge was her real passion. That's why I was drawn to Louis Sachar's new novel, The Cardturner, which is all about this card game that was so popular a generation or two ago. The main character is 17-year-old Alton Richards, who reluctantly finds himself hired to help his blind (and wealthy) great uncle play Bridge. Alton prefers videogames to cards. Alton's father has lost his job in the recession and his parents hope this good deed for a relative they barely know might get them into the will, but Alton discovers that he enjoys the company of his witty and wise uncle, who hides a tragic Bridge secret. Alton also finds romance in a fellow teenage card player. I found myself skipping the explanations of how the game is played and the "play by play" accounts of the Bridge hands, because I was more interested in what was happening to the characters beyond the card games. The story was both funny and genuine. I'm still not sure I understand my grandmother's game any better than I did, but The Cardturner turns out to be something of a page turner.