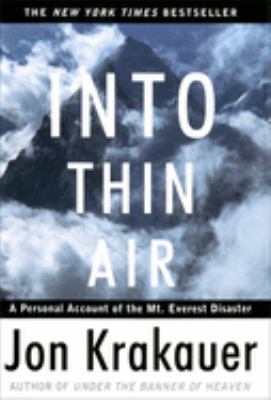 29,0208 feet, 8,848 meters. The highest spot on the planet. The Nepelese call her Sagarmatha, the Tibetans call her Chomolungma but most of the world knows her by the name of Everest. On May 10, 1996 Jon Krakauer, a columnist for Outside Magazine straddled the summit of Everest, snapped a few photos to document his accomplishment and began his descent towards his camp. When Krakauer turned his back on the top of the world, he had no idea that a murderous, freak storm was about to bear down on more than 30 climbers attempting to summit that fateful afternoon. Linked by an intense desire to conquer the most daunting of mountains, members of Everest expeditions pay thousands of dollars for months of being exposed, frozen, and injured on an unforgiving slab of rock and ice. The author introduces the reader to an interesting cast of fellow adventurists as they started their perilous climb from Kathmandu upwards to the summit of Everest. Krakauer takes the reader along for the ride step-by-step, over deep crevasses, exposed slabs of rock and into aptly named Death Zone of 26,000 feet and above. A thrilling read.