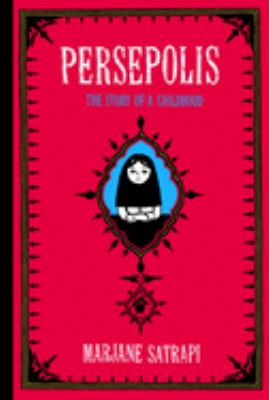 This book is much more than meets the eye, because although it seems to be just a graphic novel with its comic strip narration, it tells a real story-of the author's childhood in Iran during those critical years of their own revolution and war with Iraq in the 1980's.  What "history" may have seemed confusing becomes vivid in Marjane Satrapi's Persepolis as she relates it from the perspective of individual, memorable events in her own life.   We see that she is just like any other youngster growing up-at times she is a rebellious, independent spirit-at other times, a Valley-girl type interested in boys, music, the latest fashions.  The world becomes smaller as we see the people in Marjane's world are the same as anywhere else-the same hopes, fears, laughter.   When forced to wear the black veil, the girls in her class cavort and make fun with it; when her parents go to Turkey, they bring back rock band posters for her sewn into their coats.  Another time, Marjane helps her mother throw out the wine her grandfather has distilled in their house when the secret police get wind of it.  Yet this book has an important message:  the resilience of human hope in the face of war and political repression is a powerful thing.

I loved this book when I read it. Two thumbs up to this and the second book (which you should also read!).

This is on my "to-read" list. I've read great things about this book.

A surprising source of Persian/Iranian history - if you're as ignorant of Iranian history as I was - besides being an entertaining and stylishly illustrated graphic novel.

A great, original read. Be sure to check out the movie as well (available at the library)-- it was nominated for an Oscar last year.

I agree that the one thing this book makes very clear is that no matter where they are living, teens go through pretty much the same issues. Although Marjane finds herself experiencing her teen years away from her country, her thoughts, actions and fears are pretty much on par with other young people with various backgrounds. This is an excellent read.