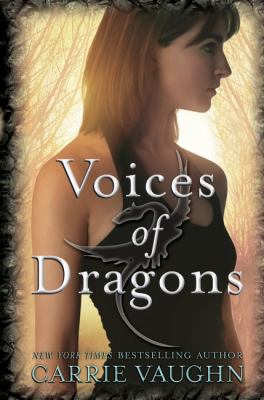 Kay Wyatt seems like your average girl from a small town. She worries about turning a friendship into a relationship, she argues with her best friend, and her hiking/rock climbing trips stray a little further from home than her parents would like. Generally, she is a nice girl from a nice family in a nice town. The one thing that makes her world a little different from ours is the dragons.

In Kay's world, dragons exist. The nuclear explosions of WWII drove them from their underground lairs leading to the Cold War--between humans and dragons. A truce was reached with each species retreating to their own designated lands whose borders are guarded and watched with weary eyes. Ever aware of their dragon neighbors, her school routinely performs dragon drills; her father, the sheriff and her mother, Assistant Director of the Federal Bureau of Border Enforcement would be on the front lines if the borders were ever breached.

When Kay accidently falls in a river that serves as one of these borders, she is saved from the freezing rapids by a dragon named Artegal. An adolescent himself, Artegal approaches Kay with curiosity, wanting to practice his "human" language. A friendship develops as they continue to secretly meet, learning about each other's species and building trust in one another. This trust becomes crucial when a military plane crashes in dragon territory and some warmongers in the military use this as an excuse to push the boundaries with the dragons--with tragic consequences. Soon, it is up to Kay and Artegal to prove that dragons and humans can peacefully co-exist.

Vaughn gives us just enough background on the dragons and humans to move the story along, concentrating instead on the relationship between girl and dragon. This is a welcome choice to those of us who love dragons but get bogged down by the complexity and detail of most fantasy novels, like the Eragon or Dragonriders of Pern series. Vaughn has created a plausible parallel world where the everyday concerns of a young girl easily become entwined with worries over border disputes and military actions. Though the ongoing debate as to whether or not Kay should remain a virgin may become tiresome for some, it does play a crucial role in the story and is not merely there to make it a "teen" novel. Kay's worries, whether about spending too much money on a homecoming dress, handling peer pressure, or losing a loved one are familiar territory to most of us. And really, who doesn't want a dragon as a friend?