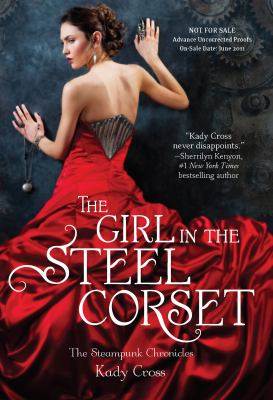 Normal girls shouldn't be able to throw grown men across the room or rip metal apart with their bare hands. But Finley Jayne is not a normal 16-year-old girl. When Finley gets angry or frightened her "darker half" takes over, making her capable of things she shouldn't be able to do and can't always remember. In 1897 England it's hard to hide such things for long.

While fleeing one such occurrence, Finley quite literally runs into Griffin King, the 18-year-old Duke of Greythorne who has unusual abilities of his own. Griffin takes Finley in and quickly discovers that she may fit into his unique group of friends, all of whom have bizarre talents. His best friend Sam is part robot as a result of an automaton attack, and Emily is a mechanical genius.

Finley and Griffin learn that their pasts were intertwined before either of them were born, and as a result, Griffin feels compelled to help her. While Griffin's feelings for Finley may be headed toward more than friendship, Sam isn't sure they should trust her at all. But before Griffin can sort out his feelings, he and his group of friends must stop The Machinist, an evil mastermind using automatons to commit crimes all across the city of London. The Machinist has already killed several people and the stakes are even higher in his latest plot.

In The Girl in the Steel Corset, fantasy, science fiction and history collide to create a very engaging steampunk novel. This is the first book in the new Steampunk Chronicles series by Kady Cross. This book is one of the first steampunk titles that I've read, but if it's indicative of what's to come both in this series and in the genre, I look forward to many more. This book is part of our young adult collection but will definitely interest adult readers as well.