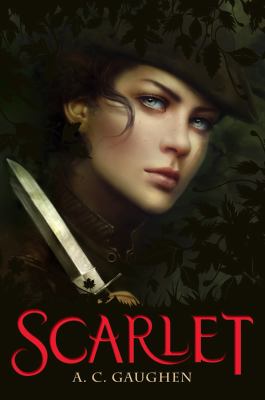 Scarlet is on the run from a dangerous secret, but she's no damsel in distress. Her deadly knife-throwing skills and ability to slip in and out of places unseen make her a valued member of Robin Hood's band. Of course, you probably know her better as Will Scarlet, the name she has taken on to hide her true identity from the people of Nottingham. Scarlet finds herself drawn to Robin, but feels that he, as nobility, would never be interested in a girl like her. Before she can sort out her feelings, a dangerous bounty hunter from her past arrives, determined to rid Sherwood Forest of Robin Hood and his band for good. Scarlet must choose between keeping her past secret and saving the lives of those she loves.

A. C. Gaughen's reimagining of Robin Hood's world has readers pondering the possibility of a female masquerading in his band. Scarlet deals with quite a few emotional issues throughout the story, most linked to her secret past. But Scarlet hides her issues with physical toughness and her ability to handle herself as "one of the boys." The ending, while a little predictable, leaves open several possible storylines for a sequel. Whether or not one will be written remains to be seen.