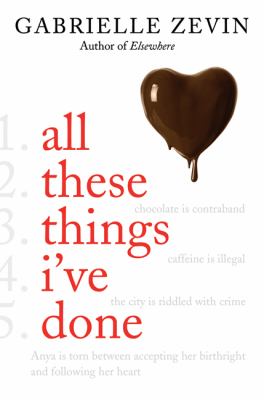 Imagine living in a world where chocolate and caffeine are illegal, only available through the major crime families. Flowers are ridiculously expensive and water and paper are scarce. Would your life be any easier if you were a mob princess? Anya Balanchine will tell you it's not. The 16 year old has been living with her younger sister, her developmentally disabled older brother, and her invalid grandmother since both her parents were murdered. Her father was the head of the Balanchine crime family, the major black market chocolate supplier for the U.S. But being a mob princess doesn't help when you're trying to stay under the radar of child services and live a normal life. It really doesn't help when you find out the new boy at school who likes you is the son of the city's assistant D.A.

Things get even messier for Anya when someone she knows is poisoned by her family's chocolate and people think she's to blame. Anya has always avoided the family business, thinking that was the safest route for herself and her siblings. But when things start happening to those close to her, she must rethink her position. Sometimes what you don't know is more dangerous than what you do.