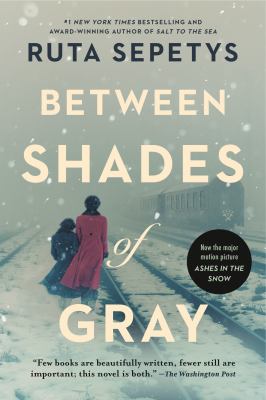 A "must-read," this book is the kind of powerful historical fiction that will be used in classrooms or summer reading one day.

"Between Shades of Gray" takes place during WWII, is based on fact, but is more accessible in voice and tone than the "The Diary of Anne Frank" or Wiesel's "Night." Make no mistake: all of these writings are important, but I can see teens and adults favoring this novel for its fresh perspective. Filled with extensive research by author Ruta Sepetys, the story is one of survival, identity, dignity, hope, and war.

Lithuania. 1941. While Hitler's hideous role regarding the Jews has been universally documented and taught in schools, much of the public knows little about another tyrant: Stalin. Our main character is Lina, an artistic 15-year-old Lithuanian; she's a girl who worries about boys, eats dinner with her family, and is excited to have just been accepted into an art school. But one night, it all changes. The Soviets storm her town, split up her family forever, and what follows are years on trains and on foot, being marched thousands of miles through Russia, north to the labor camps of Siberia. It's a cold sort of hell with hard labor for Lina, disease all around her, punishment for her brother and mother, and death for short-lived acquaintances.

But, through all of this, Lina finds solace in her art. She continues to write and draw of her experiences in hopes that these documents will one day let the world know what happened during this devastating time. The Baltic States lost approximately a third of their population from Russian-fueled genocide and Sepetys gives well-written insight into how it happened and what it might have felt like.

An important and moving book, "Between Shades of Gray" has great potential for the teens and history buffs of all ages.