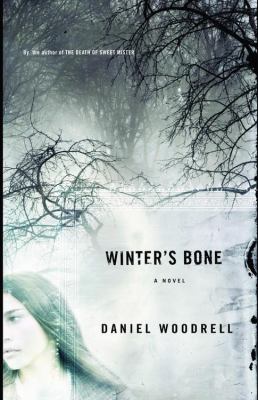 I don't usually read books after seeing the movie, but after watching the "Hunger Games" starring Jennifer Lawrence, I was reminded of another movie she starred in; "Winter's Bone." It came out several years ago and was a wonderfully atmospheric movie (if you haven't seen it yet I highly recommend it, but read the book first).

"Winter's Bone," by Daniel Woodrell, who was born and raised in the Ozarks, and whose first-hand experience gives the people, place and dialect authenticity, is the story of Ree Dolly.  Ree is a 16-year-old girl trying to survive in the bleak poverty of the Ozarks while caring for her two younger brothers and mentally ill mother. Her drug-addicted and methamphetamine-cooking father has put up the family home and land as bond while he awaits trial, but has now disappeared. With his court date just a week away, and no one else to turn to, Ree sets out to find her father--dead or alive. Despite her kinship with the ruling clans who control the local drug-trade, Ree is thwarted at every turn in her search. In the face of the threats of physical violence Ree shows courage and determination; her own sense of responsibility demands it. The story becomes darker and the people become meaner, but there is no way for Ree to go but forward.

This story is compelling and real. The extreme poverty depicted in the story and the lengths that Ree must go to, to ensure the safety and well-being of her kin, is gripping. The author does not look away from the harsh realities of such an existence. The Ozark Mountains themselves become a character with the merciless cold which you can feel in your own bones and the desolate landscapes we encounter as Ree seeks to uncover her father's fate. Despite the harsh realities of this world, Ree finds an unlikely champion in her frightening uncle Teardrop; half his face melted away in a meth-cooking accident, his display of family loyalty despite any personal cost to himself gives her hope.

At the heart of the story, is of course, Ree. Hoping to free herself of the grinding poverty and hopelessness of her community, she plans to enter the military. At the age of sixteen she is still too young, and with her father missing, she is left to care for her family. Through mental illness her mother fled this world and Ree feels she must protect her mother from the harsh realities she has succeeded in escaping. As her younger brothers get older, her hope is that these boys will not become "dead to wonder by age twelve, dulled to life, empty of kindness, boiling with mean".

"Winter's Bone" has been described as "gothic", and aptly so as it is atmospheric and dark, but this is its appeal. This is not a place you would want to visit, nor are these people you would want to meet (for the most part), but once you start reading about this place and these characters, you won't want to stop.

If you enjoy this story, consider reading "The Cove" by Ron Rash, "American Rust" by Philipp Meyer or "Methland: The Death and Life of an American Small Town" by Nick Reding.

Your review got me to watch this movie and It was very dark but I enjoyed it. Hard to believe people still live that way. I am looking forward to reading this book and have it on hold.