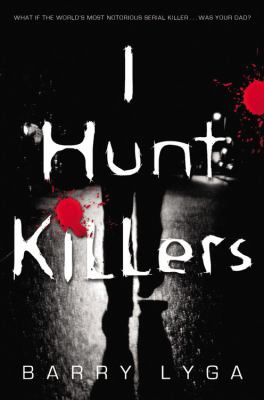 It's a bloody, disturbing book.

We follow Jazz, a teen just like any other. He wants his own life, his friends, and a girl. But unlike you and me, Jazz grew up being indoctrinated by his serial killer father. At seven, Jazz was seeing things no one should. Now, Jazz is seventeen. Four years have passed since his father was caught for committing over a hundred murders and other gruesome acts. "Never become your father," he says, "People are human beings."

He doesn't want to kill... until a copycat killer arrives in the town and starts killing people in the same order and style as Jazz's father, starting with number one. Jazz's unique abilities passed down from his father may be the only thing that can help local law enforcement to catch this guy. Nobody knows his father's killings better than Jazz, except for maybe this new killer. Will hunting this serial killer change Jazz forever?

Easily the most mature and graphic "young adult" novel I've read, I Hunt Killers is a tale for brave and fearless older teens and adults. There are very suggestive themes, references, and adult language. The good news is fans of the twisted TV show "Dexter" or "C.S.I." will love the brutality, police jargon, and true-life forensics/medical science. And, boy, do you get in these character's heads.

A great page-turner by Barry Lyga, and the first in a brand new series.

Sounds interesting...one I will definitely have to add to my "to read" list.