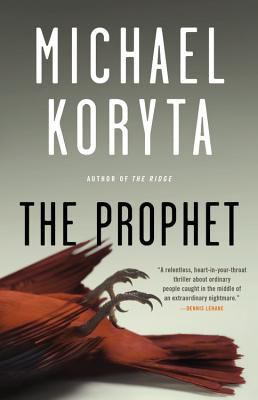 I was looking for something a little different for the November mystery book discussion, so why not a football mystery? "The Prophet" by Michael Koryta takes place in a small Ohio town, where the local high school football team, the Cardinals, is closing in on a perfect season with a spot in the playoffs and a shot at the state championship.

Kent Austin, the Cardinal's respected football coach, is hoping this will be their year; everything is falling into place. Then the unimaginable happens when a local girl, Rachel Bond, is found murdered. Not only is she the girlfriend of one of the team's star players, but the slaying eerily echoes a similar crime. Many years ago, when Kent Austin and his older brother Adam played for the Cardinals, their sister, Marie, was abducted, raped and murdered on her way home from school.

Now many years later, the brothers are estranged. Kent is a content family man; he has found religion and has made it his mission to bring faith to the men behind bars. He has forgiven the man who put his sister in her grave.

Adam, however, gave up his dreams of playing football and is now a bail bondsman in his hometown; he has never recovered from Marie's death. It was Adam who was supposed to have driven Marie home from school, and he who has borne the responsibility for her death all of these years.

Now, it seems, Adam is answerable for another girl's death. Shortly before her murder, Rachel came to Adam looking for help finding her father. She had been secretly writing to him in jail and knew that he had been released and was in the local area. Adam's advice to her was to drop it, but she didn't go there looking for advice, she just wanted an address. In the end he found an address, and it was there that she was later found dead. This time, Adam has sworn revenge.

Initially I found the football a little distracting, but as the story progresses the games became more integral to the plot. In many ways this was a traditional mystery; Adam uses his skills as a bail bondsman and relentlessly tracks down the killer. But it's not as easy as that (it never is, is it?) It soon becomes apparent who the killer is targeting, and that each brother shares part of the blame for Rachel's death.

Michael Koryta has written several novels, including a mystery series featuring private investigator Lincoln Perry. Two of his novels are in the beginning stages of being made into movies.

If you like this book by Koryta, you might also like books in the Charlie Parker series by John Connolly and Harlan Coben's "Gone for Good," or his Myron Bolitar series.