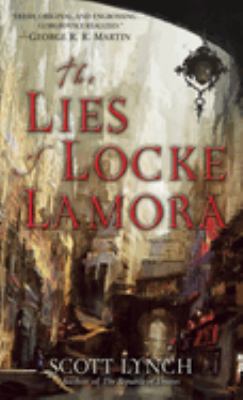 If you like Venice, Rome, Oliver Twist, Shakespeare, the Renaissance, the Godfather films or Ocean's Eleven, this fantasy epic is for you. For readers hesitant to tackle longer books, or the fantasy genre in general, I can say without a doubt that Scott Lynch has written a masterful, instant classic -- an unequivocal accomplishment of world-building and detail that earns his mention in the same breath as Charles Dickens, George R.R. Martin and Tolkien.

The Lies of Locke Lamora showcases a clever blend of influences. Witty, bloody, and politically complex, Camorr is a place I had no problem losing my imagination in; an island-like city of gondola travel, hidden passages, mages and violent sea creatures, mysterious buildings of ancient glass, poverty, and a dash of magic that never gets in the way of the story. From the language, to the memorable characters, to the Italian-infused names of places and districts, the author composes an engrossing narrative with carefully structured flashbacks and foreshadowing. As one who is wary when reading fantasy, I devoured this book. It's well-paced for the patient reader who likes all the little things one would find in a well-researched historical fiction.

With fresh plot twists and a gritty edge, The Lies of Locke Lamora is one of the best books I've read in years.