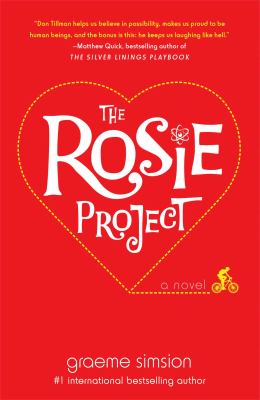 Genetics professor Don Tillman's life is highly regimented; he prefers it that way. His weekly schedule is timed down to the minute, and if one thing changes, everything else has to be recalculated. He has even instituted the Standardized Meal System for himself, which, among other things, has the advantages of a standard shopping list, a nutritionally-balanced diet, and almost no waste. He bikes or jogs everywhere, and does aikido martial arts for exercise-a practice he took up at age seven to use as self-defense against the bullies. His every action is determined by logic and reason, but he does his best to be kind when the situation calls for it.

Don, the main character in Graeme Simsion's novel The Rosie Project, is extremely bright and capable, but he realizes he's socially awkward. In fact, he has been rejected by women so frequently that he has abandoned the idea of finding a partner. Then the obvious solution comes to mind: a scientific questionnaire! He could use it to weed out all the obviously unsuitable candidates-the smokers, the couch potatoes, the late-arrivers, etc. Don whittles the questionnaire down to 16 pages, and the Wife Project has begun.

Don submits the questionnaire to an online dating service, and soon has more applicants than he can handle. He decides to let his friend and coworker, Gene, pick out a few for him to date. Not two hours later, Gene sends the young and confident Rosie Jarman over to his office. Don asks her out to dinner (as Gene had suggested earlier), but the evening doesn't go as planned. Don rides his bike to the swanky restaurant wearing a t-shirt and a Gore-Tex jacket, which doesn't satisfy the "jacket required" rule. Don ends up in an altercation with the restaurant's large bouncers, in which he comes out on top. The "Jacket Incident" finally ends when Rosie appears and takes charge of the situation.
Don and Rosie end up eating dinner at his place, but his schedule is now quite off-kilter. Rosie roams around checking out his place and asking questions, which makes Don a little uncomfortable. He can't understand why Gene would recommend Rosie, when she is obviously unsuitable as a partner for him. She's sometimes late, works as a barmaid, and-heaven forbid-she smokes! However, they end up eating on his balcony (Rosie's idea) and having more wine with dinner (again, Rosie's idea), and a great conversation ensues. After Rosie leaves, Don feels oddly relaxed in spite of all the disruptions to his schedule.

Don discovers that Rosie wants to find out the identity of her biological father, something a genetics professor could help with. He doesn't understand it, it's not rational, but he somehow wants to spend more time with her. The Father Project is born.

The two of them set out to get DNA samples from all the possible suspects, which involves some interesting and sometimes hilarious activities. I don't want to give away the humor, but during the story Don applies his photographic memory to cocktail recipes, dance steps, and more, and makes his escape from a bathroom by climbing down a four-story wall. It's fun to watch their back-and-forth relationship develop as they each change a little for the other.
Don't be fooled by the red cover with a heart on it; the story and humor in this book would appeal to men as well as women. Everything is told from Don's point of view, so you get a good feeling for what's going on in his brain. If you haven't already read this book, run, don't walk, to your nearest library branch to check it out. You won't be sorry.

If you enjoy this book you might also be interested in Raising Cubby and Look Me in the Eye, both by John Robison, The Kitchen Daughter by Jael McHenry, and the TV series Big Bang Theory.