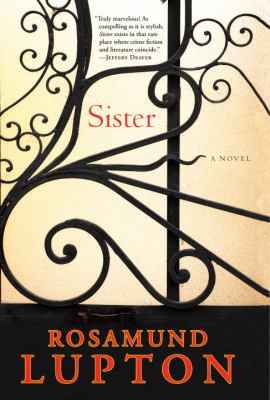 Bee is happily engaged and has just finished celebrating a recent promotion when she gets a frantic call from her mother. Her beloved sister Tess is missing. Though convinced her sister will turn up safe and sound, she takes the next plane home to London. It isn't long before things take a serious turn, and when her sister is found dead, apparently at her own hand, Bee finds that she alone does not accept her sister's suicide.

In Sister, a novel of psychological suspense, author Rosamund Lupton writes of Bee's determination to prove that her sister was murdered. Obsessed with finding Tess' killer, Bee moves into her house and begins to explore her sister's life. She doggedly pursues every lead and slowly peels away the layers of her life.

Despite a five-year age difference, Bee and Tess had always been close. This closeness was reinforced when their brother died at age eight of cystic fibrosis; it is the shared experience of their brother's death that more than anything convinces Bee that Tess could not have taken her own life. How could Tess take her own life when her brother had fought so hard for his? Sent off to boarding school shortly after her brother's death, the only constant in Bee's life has been her sister. They stayed in close touch, even when living far apart. Bee is haunted by the knowledge that she was not there when her sister needed her most.

Soon Bee begins to question how much she really knew Tess. She discovers that her sister had been pregnant and had given birth shortly before her death, and that the married father of her baby wanted nothing to do with Tess or the baby. Could a drug-addled student who was stalking Tess have had anything to do with her death? Interesting questions about genetic testing and engineering are raised when Bee discovers Tess had participated in an experimental medical trial involving her unborn child.

The story is told in the form of a letter from Bee to her sister. As Bee tells the story we witness her grief, complete with self-recriminations and sorrow. This one-sided dialogue fosters a feeling of closeness with Bee as well as Tess. Through an examination of Tess' life, Bee is able to look at events from her own life and decisions she has made from a different perspective. In the process she learns not only more about her sister but about her own life and who she is. Through Tess she finds herself.

If you enjoyed this novel you may like the author's psychological thriller, Afterwards. Books by Nicci French and S.J. Bolton will also appeal to you. If you like a more literary style, try books by Kate Atkinson, whose Jackson Brodie series begins with Case Histories.