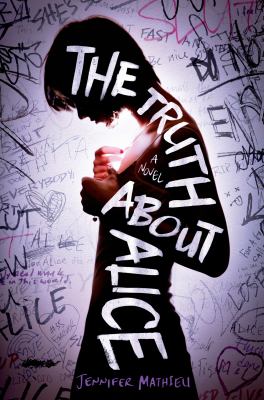 One of the worst things about high school has to be the rumor mill. And in today's society where everyone has a cellphone and is connected with social media, a rumor spreads like wild fire-especially when it is a juicy one. Such is the case for poor Alice Franklin in The Truth About Alice by Jennifer Mathieu.

Alice Franklin is one of those girls-you know the type, just pretty enough to be liked by everyone but not so pretty that she is super popular. She is smart enough to get decent grades and makes friends easily but on the whole, minds her own business. With this territory, comes the usual jealousy and misunderstandings of typical teenage life. When Alice is invited to a party hosted by Elaine O'Dea, the school's most popular girl, she goes thinking nothing of it. However, things get ugly when Brandon Fitzsimmons, the school's star football player and Elaine's boyfriend, gets caught alone with Alice.

The entire school latches onto a vicious rumor. Even Alice's best friend, Kelsey Sanders, won't answer Alice's calls or talk to her in school. To add insult to injury, a few weeks after Brandon's rumor hit the streets, there's a terrible accident. Rumors spread that Alice was sending Brandon racy texts.

As Alice's life crumples around her, the only person who treats her with any respect or dignity is Kurt Morelli, the school nerd.

This book was heart wrenching in its realism. When you read it you will think to yourself that teenagers can't possibly be this cruel and heartless, but I felt that they were written true to form. Bullying is such a problem in our schools today and reading this book shows how quickly and easily something seemingly small can get out of hand.

The story is told from the 4 different points of view of Elaine, Josh, Kelsey, and Kurt. It was interesting to see how each of them felt about what was happening and how they justified everything in their minds. I also found it telling how the author didn't use Alice's voice until the end of the book. Isn't that exactly how rumors work?

Although I found this story to be heart-breaking, I thoroughly enjoyed it. I would recommend it to all teens and parents as a cautionary tale of how wrong things can go when lies go unchecked. Readers beware; there is some adult content and language in this book, but it goes a long way to setting the stage for this gritty teen novel. It is a quick read that will have you trying your best to piece together what exactly is the truth up until the very end.
If you are in the mood for other books about bullying check out some of these titles: By the Time You Read this, I'll Be Dead by Julie Ann Peters; Some Girls Are by Courtney Summers; 13 Reasons Why by Jay Asher; and Hate List by Jennifer Brown.