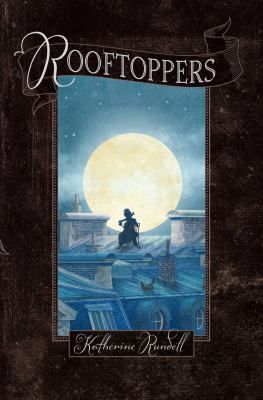 Rooftoppers feels like a birthday, shines like the moon, and reads like milk chocolate. This book is nothing less than a new classic children's fable; easily read by adults and children alike and loved for its themes of family and imagination.

When an eccentric English bachelor finds a baby floating in the English Channel, he raises her to love books, to love learning about the world, and to love reaching for the stars. He fosters within her a beautiful curiosity that had me smitten. The girl's name is Sophia, and in addition to being clumsy and curious, she is also positive beyond a reasonable doubt that her mother is still alive and will find her one day. She believes this even though she loves living with Charles, the bachelor, where she gets to write on the parlor walls, cut her own hair, and wear boys' trousers. Plans to reunite Sophia with her possibly-still-alive mother are sped along when a cascade of questions are thrown at Charles courtesy of the National Child Agency. The agency doubts Charles' ability to raise a young girl in early 20th Century London. It's unseemly; taboo. So Sophia and Charles flee on a train to Paris to find Sophia's mother.

Prepare to fall in love with language and be moved. Your heart will move about in your chest, I promise. The use of metaphor and simile is poetic and nearly unmatched in childrens' or teens' literature.

Philip Pullman, author of the Golden Compass, credits the author on the back cover as having an "utterly distinctive voice", and I have to agree. This is a compelling read, one of the best in years for middle grade fiction. Author Katherine Rundell has said herself that "reading is almost exactly the same as cartwheeling: it turns the world upside-down and leaves you breathless." Ms. Rundell, thank you for the cartwheel.