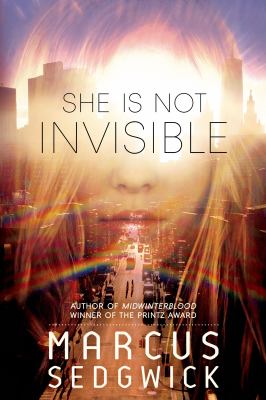 Laureth Peak is 16, English and blind. Her father Jack is an eccentric author who has, of late, been obsessed with writing a book about coincidences. Charged with handling her father's email account, Laureth receives an email from a man in New York saying that he has just found Jack's notebook, could he make arrangements to collect the reward for its safe return. The problem is Jack is supposed to be in Switzerland, not New York. Laureth tries contacting her father but there's no answer.

Things between her parents have not been going well lately and her mother, quite frankly, doesn't really care where Jack is. Convinced her father is in trouble, Laureth books a flight to New York for herself and her little brother Benjamin (she's NOT abducting the seven year old she tells herself, she needs his help). Together she and Benjamin will follow the clues in her father's notebook to solve the mystery of his disappearance.

As Laureth ponders the fragmented and increasingly disturbing notes in her father's notebook, you too will ruminate over the nature of coincidences. Are they merely statistical certainties or are they evidence of something more mystical, more powerful? If they are simply a matter of mathematics, why do so many of us experience an emotional or physical response like a tingle down our spine or a little thrill of joy when they occur? If coincidences are indicative of a higher power-what do they mean?

While She is Not Invisible gives you plenty to think about long after it is over, the most compelling aspect of the book just might be in the way Sedgwick describes the world. Because Laureth is blind and always has been, there are no visual descriptions but instead sounds, smells and even the temperature are used to convey Laureth and Benjamin's journey overseas to the sprawling, foreign and possibly dangerous city of New York.

You may also enjoy his other work, Midwinterblood which won the 2014 Printz award, an ALA literary award that annually recognizes the "best book written for teens, based entirely on its literary merit".